22 The last weekend of January, as every year for 22 years, was filled with the festive atmosphere of a multinational caroling. Those who came to the XXII International Festival and participated in 2-day auditions did not disappoint: the level of performances of East Slavic carols and songs did not give way to previous editions of the Festival: it was varied both vocally and instrumentally, and even … theatrically. The bands that came to the Festival prepared for the performances perfectly. Children, young people and seniors, amateurs and professionals, soloists and bands, instrumental musicians and singers met on stage. All for one purpose: to praise the Newborn, and thus to express the centuries-old tradition.

On the Terespol stage on 28 and 29 January 2017 there were 29 teams from Poland and abroad: from Russia, Belarus and Ukraine. This means that the audience these days saw the performances of more than 600 performers, who during the 22nd International Festival of East Slavic Carols in Terespol presented a diverse caroling repertoire. 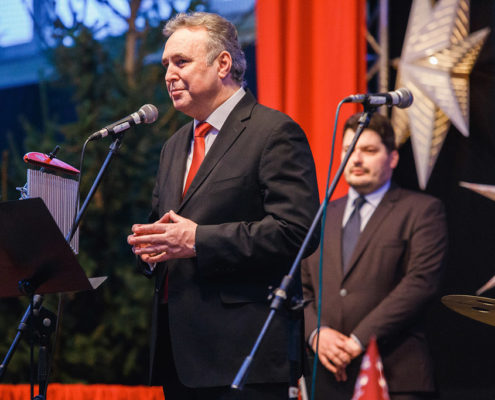 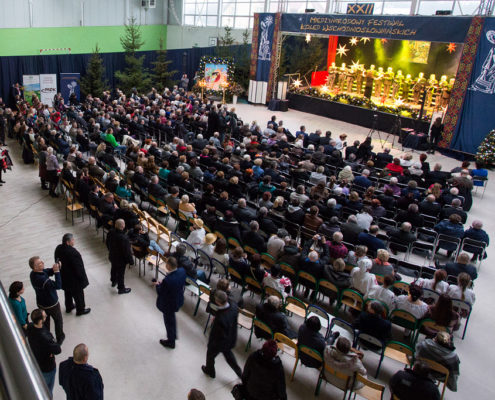 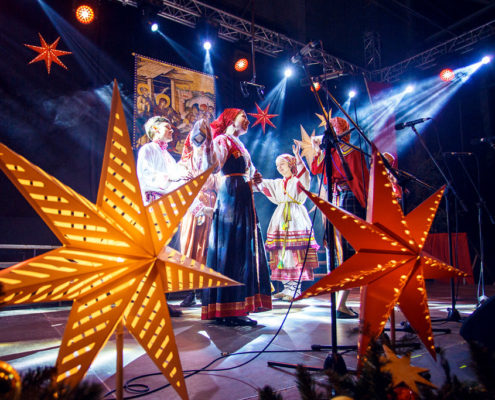 On the first day, after the official opening and welcome of guests by the hosts: Anna Pietrusik, director of the Municipal Cultural Centre in Terespol and pr. Jaroslaw Los, rector of yhe orthodox parish of st. John the Theologian, . the energetic folk band “Czeremszyna” set the audience in a joyful caroling. This is an infrequent opportunity to see this group in the caroling repertoire – for Terespol, however, they prepared a separate performance, nowhere else presented. What about Christmas carols? Kind of well-known, widely sung, but how different sounding – because proposed in a contemporary, folk arrangement exquisitely tuned us, and it was already at the beginning of the festival!

Later in the first day of the review, diversity, but at the same time professionalism were those qualities that dominated and determined the nature of further performances. In fact, there were another 16 bands on the stage, professionally advertised by Dr. Marcin Abijski, which represented the various pedigree of the presented Christmas carols, such as the Youth Choir of the Orthodox Parish of . The Resurrection of the Lord in Bialystok – the band enchanted the audience with the Serbian tradition of carol songs, or the choir “Cholmszczyna” from the Center for Orthodox Culture in Chelm, which – the youngest among the participants (the choir was formed in November 2016!) – presented a high level, as well as a unique dedication and commitment to the performance, or the Folklore Ensemble of the Piotr Tchaikovski State Conservatory from Moscow, who, based on long-standing scientific ethnographic studies in the field, recalled and resurrected the roots of folk, the original rural caroling. And the Bandurist Band “Zorianica” of the Ivan Franko State University in Lviv again, as the band was already performing during the festival in Terespol, presented a high artistry of singing and playing instruments. In turn, the Youth Female Chamber Choir “Fresk” from Minsk, Belarus, enchanted the audience with the professionalism, purity and delicacy of singing, and above all creativity and courage in arrangement; “Lulajze Jezuniu” in their execution will remain in our memory for a long time.

Other teams on this day also cannot be denied commitment, professionalism and dedication in preparing and presenting the caroling tradition on stage. 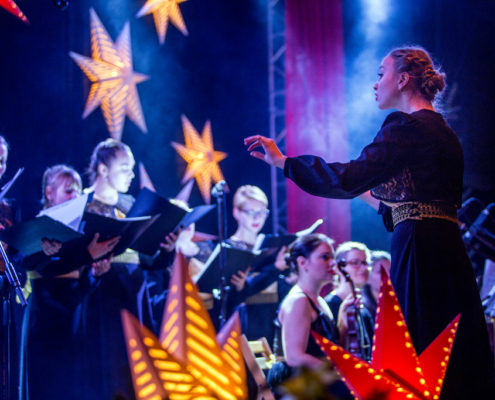 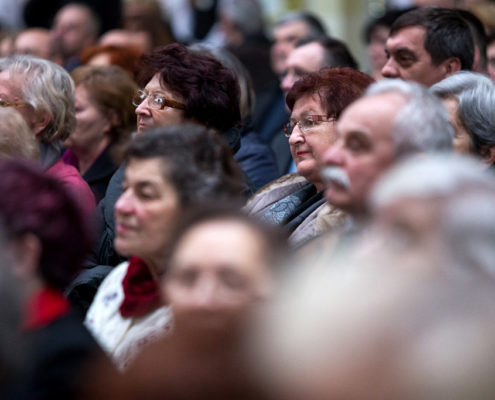 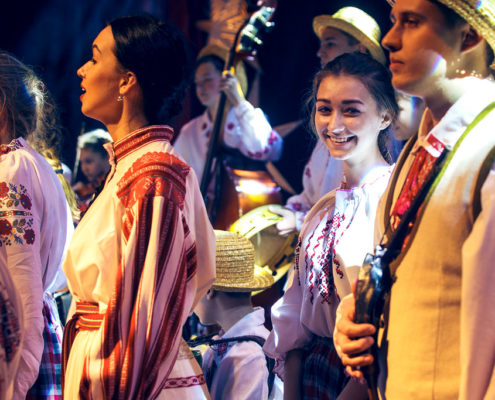 On the second day, traditionally, the Festival ended with the joint singing of the christmas carol “Heaven and Earth” by the performers and a large audience. 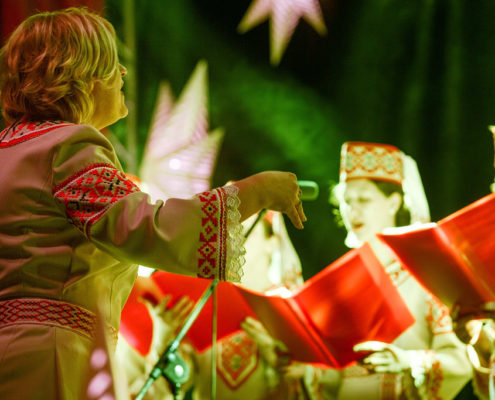 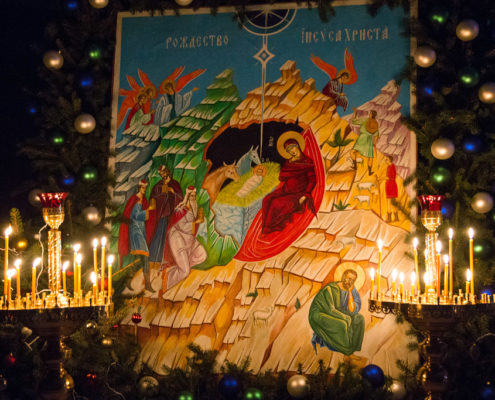 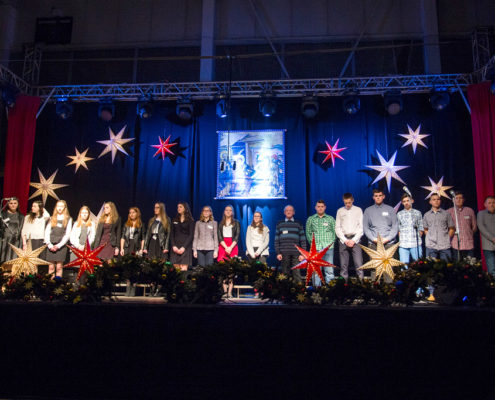 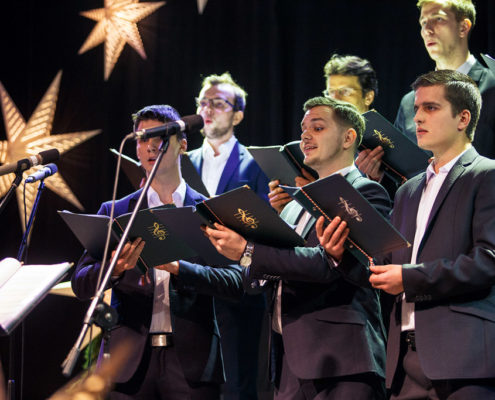 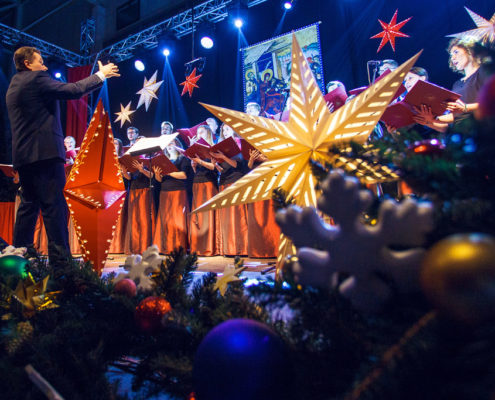 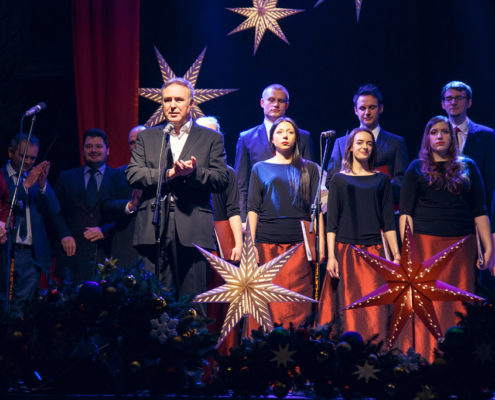 The XXII International Festival of East Slavic Carols is behind us, but the caroling emotions, sometimes hot and fussy, but above all the variety of performances still resonate in our harts and memory. This year, additional attractions accompanying the review were: the exhibition of folk handicrafts and the photographic exhibition of the Orthphoto Association. “The heritage of Orthodoxy – young people in action for the parish”.

During two days of auditions, we were the recipients of more than 8 hours of East Slavic, traditional Christmas music, and at the same time participated in a lively, for thousands of years cultivated carol tradition of the eastern borderland of Poland and Europe. This would not have happened without the involvement of the organizers of the Festival: Artistic Director – Mr. Andrzej Boublej, Lublin-Chelm Orthodox Diocese, employees of the Municipal Cultural Centre in Terespol, the Nadbuzanski Cultural Center and the Foundation “Dialogue of Nations.