8The caroling, started seven years ago, has made a significant contribution to the integration of cultural, religious and moral environments. According to the organizers, the festival was to resurrect the spiritual culture, so characteristic of the Podlasie land, to revive the parish choirs in the Lublin-Chelm Diocese, and at the same time to show the multiculturalism of these areas. It was actually a bit different. The original ideas over time became a little blurred and the festival with each subsequent edition took on an elite character. This was because the professionals clearly overshadowed the craftsmanship of small, mostly rural, parish choirs. Consequently, the latter most often gave up participation in the competition. An additional stressful element for small teams was the presence of jurors. Amateurs, and such at festivals were the most, already at the outset predicted failure, while professionals did not want to be compared with the weaker, not always prepared in terms of voice or music. This, for some unhealthy rivalry, did not last long. Already in 2002, Archbishop Abel decided that the festival should return to the original idea of reviving parish choirs. Therefore, in 2003, during the 8th edition, it was decided to abandon the competition formula. The organisers were also in favour of the change. Ryszard Korneluk, the new director of the Municipal Cultural Centre in Terespol, stated in the magister’s thesis already quoted by Tomasz Jesuit: the idea is to present the widest possible range of carols and pastorals.

Preparations for the organization of the festival began in full swing, taking into account previous comments and observations. This, among other things, is why considerable organizational and regulation changes have been made. These innovations were facilitated by housing conditions. In June 2002, a new facility, a large sports and entertainment hall, was opened, where there was a place for the Municipal Cultural Centre. The organizers eagerly decided to use the conditions of the new facility, generally conducive to the conduct of the event of this range. The only serious caveat is not the best acoustics of the hall where concerts take place.

Started by renaming the festival. It was agreed that from the 8th edition of the Terespol caroling will bear the name: International Festival of East Slavic Carols. A social committee was set up to coordinate all the work, chaired by Ryszard Korneluk, the new Director of the MOK. The vice-presidents were entrusted with Lt. Col. Fr. Alexei Andrejuk and Fr. Jaroslaw Los. Anna Pietrusik became the secretary of the committee. The preparations were supervised by an honorary committee composed of:

A great help in the organization of the festival served the Bialopodlaska Land Office and Orthodox military parish of St. Mark the Apostle in Biala Podlaska. The Ministry of Culture and the Ministry of National Defence department of education and defence promotion also co-organized the festival.The organizers already at the first meeting have developed new regulations of the festival.

The main task of the new editions is to present the multicultural achievements of Southern Podlasie in the field of choral singing, to mutually cognition and integration of multicultural environments of peoples and to restore the role played and play by Carols in deepening the religiosity of peoples. In addition to the records concerning the place, the date, the prizes, the address of the organizers, there are also conditions of participation, in which one was new and significant: Each choir performs at least four carols, including at least two from the traditions of the Eastern Church.

The organizers also decided to seriously modify the formula, replacing the contest with a review. The literary beauty and artistry of the performance of christmas carols will be judged by the vote of the public, and not, as before, by a professional jury. The best performers selected by this route will receive cash prizes and diplomas, as well as each participant beautiful icons in metal rizas funded by one of the sponsors. 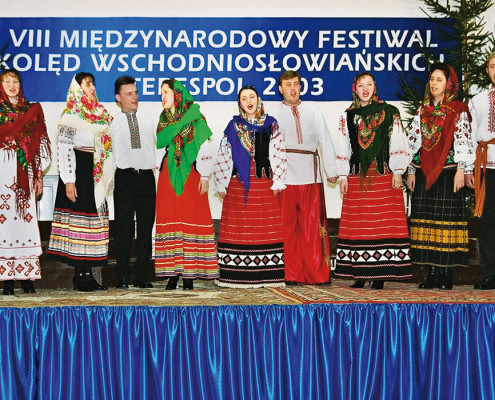 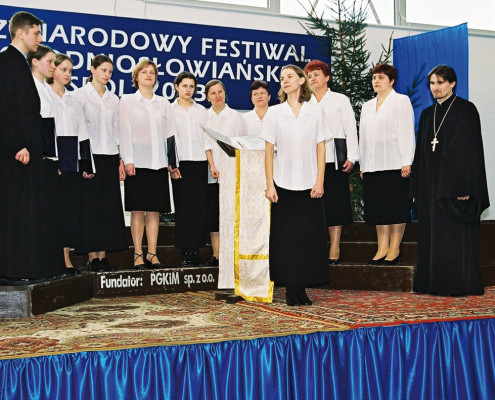 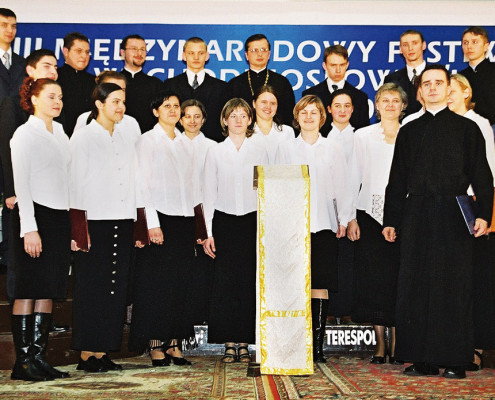 On February 1, 2003, for the eighth time in Terespol, “hearts sang on the eastern note to praise the name of the Newborn Lord”, and as the already rich tradition shows from year to year in an ever-wider group. This time under the auspices of the Minister of Culture Waldemar Dabrowski.

In the 8th edition of the Festival of East Slavic Carols took part 20 choirs, bands and singing groups (more than 400 people) from Poland and Ukraine and Belarus, which confirms the international character of caroling. In addition to the review, there were also two local choirs : the Orthodox Parish and the Roman Catholic Church. Since at least two Orthodox Carols were to be presented, catholic and secular choirs, as well as ensembles of singers and ceremonial groups not associated with the Orthodox Church, could also be heard. The festival was thus given a truly ecumenical character. As Tomasz Jesuit rightly pointed out: adults, young people and children sang. As in previous editions, Terespol caroling was divided into two days.

On Saturday, they presented themselves:

A very high level of performers had to please even the most sophisticated music lovers. This time, the Minister for Employment and Social Affairs did not regret the applause and Lech Nikolski, the Chief Of Staff of The European Union, Tadeusz Lazowski and his deputy Jan Bajkowski, the mayor of Terespol Zbigniew Banach, representatives of the predominantly Orthodox clergy and the mayors of many municipalities. His satisfaction was not hidden by Vladyka Abel. In an interview with the “Dziennik Wschodni”, he told:

I am pleasantly surprised by the audience attendance and the artistic level of the performers. I am particularly pleased with the presence of non-Orthodox groups on stage. Resurrecting the forgotten East Slavic Carols from their place of residence enrich the Podlasie land.

A very eloquent summary of the 8th edition by Andrzej Boublej, a music consultant, in the same issue of the “Dziennik Wschodni”:

It’s hard to judge a musical level when the heart sings. There has been a revival of many groups operating in the Lublin region, including youth. A few new choirs have even been formed for the performance in Terespol. The festival has fulfilled its role.

These hearts on the eastern note sang in Terespol extremely loudly and beautifully. Michal Boltryk from the Orthodox Review noticed and heard them. In the March issue, he cited the impressions of several people, including Tomasz Jesuit, a long-time juror and author of a thesis on the festival. This local music teacher sees our caroling like this:

This event is developing and has a chance to continue to flourish. The festival raises the profile of Terespol. Our city can be known not only for the border crossing, but also from this festival.

Ryszard Korneluk, director of the Municipal Cultural Centre, who, as the new head of the institution for the first time, did not hide his pride in such an undertaking:

For 21 years I headed the Railwayman’s Culture House in Malaszewicze. There were many events, but not of such rank. This year, more than four hundred people performed in Terespol. That speaks for itself. “If someone asked you, is such an event needed in Terespol?” “As the director of this facility, I answer: it is not only desired, but necessary. These are our traditions, the traditions of our grandparents and fathers. We are obliged to cultivate this legacy. This is one of the most important events in the calendar of our facility. I cannot imagine that the Festival of Christmas Carols in Terespol will cease to exist.

Slowo Podlasia wrote very warmly about the festival. The journalist reporting on the event was clearly impressed by the beautiful-sounding voices:

You can carol in different ways. During the two-day marathon in Terespol, songs were performed in old-Orthodox, Slavic, Polish, Belarusian and Ukrainian, thus emphasizing the symbiosis of the Latin and Eastern traditions. Orthodox believers sing in churches without organs, so a unique effect must create divine melodies and dignified-sounding voices. This principle was confirmed during the festival. Christmas songs delighted the audience with its unique beauty. Most of them performed the choirs of Orthodox parishes, which had a lot of Christmas carols in their repertoire. For two days there was a unique atmosphere in the MOK sports hall. As Archbishop Abel assured the audience, the Carol festival of Terespol grows into an artistic event and is a kind of prayer that resurgents spiritual culture.

As Ewa Baglaj from “Dziennik Wschodni” rightly pointed out, the rank of this international event continues to grow, as evidenced by the growing list of participants, honor guests and sponsors.