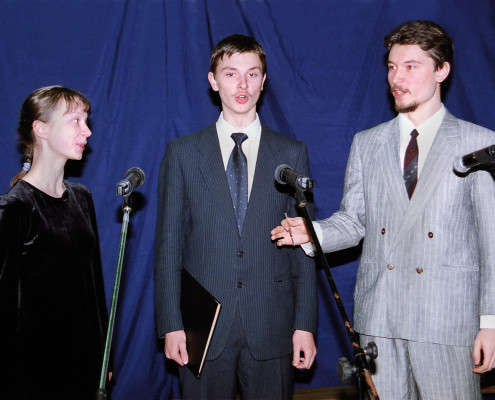 6 In 2001, the 6th edition of the festival was organized with even greater momentum. On 20th and 21st January 25 teams from Poland, closer and further a far, between Belarus and Ukraine could be admired within the guest walls of the General Schools Team. Almost 500 choristers performed on the Terespol stage. Recalling the author of an article in Slowo Podlasia:

The program of this festival was greatly varied. Youth folklore and secular bands showed off next to parish choirs. The greatest artistic impression was left by three formations: Triodion from Torun, the choir of the female monastery of St. Nikolaus in Horodko, Ukraine, and the choir of the brothers of the Orthodox Monastery of St. Onufry in Jableczna Maria, Lukasz and Michal Hajduczenia, children of the Orthodox clergyman, wonderful siblings endowed with exceptional vocal abilities, charmed listeners with a beautiful performance of Orthodox carols: Nebo i zemla, Dywnaja Nowyna, Dobryj veczir Tobi, “Radujtesia”. In a masterful style, ukrainian nuns sang under the direction of ihumenya Mikhaila No less excellent performance of choral singing for voices was performed by the monastery brothers from Jableczna under the direction of archmandrit Jerzy Pankowski. Great-sounding Carols: Nocz tichaja nad Palestinoj, Wsawajte, wsawajte or Slawa w wysznich Bohu, touched the hearts and souls of many listeners.

The six-person jury, among the judges so far, appeared the Mitrophoric proto-priest Michał Niegierewicz from Hainowka, sitting under the leadership of Dr. Vladimir Volosiuk from Lublin had a difficult task in predicting the winners, because many performers made a great impression of the selection of repertoire and level of performance.

The performances of choirs outside the jurors and a very large audience were closely followed by guests, representatives of the authorities and clergy. The Bishop Abel was honored by his presence, saying that:

The Festival of Carols in Terespol grows into a great artistic event and is a kind of Podlasie prayer. Great thanks to the organizers: the Orthodox Dean of the Terespol District, the Municipal Cultural Center, to which the new ones joined: the Land mayor of Biala Podlaska and the Orthodox Military Parish in Biala Podlaska. There were also new and generous sponsors of this ecumenical, multicultural and unique caroling.

About the 6th edition of the festival the newspapers wrote quite more: the weekly Slowo Podlasia and the Eastern Journal. Excerpts from the festival were shown by Polish television in its regional edition and reported by Radio Lublin.