20 XX Jubilee edition leads to a brief summary of the past twenty years. It is possible not to fall into exaggeration, to say that the festival was a success – it entered into the cultural calendar not only of the city; is also important at national and international level. Currently, the performing choirs present the highest artistic level, but its greatest merit is to restore memory and cultivate the East Slavic caroling rites. It is here that intergenerational dialogue takes place, where the younger ones, listening to the elders, carry this centuries-old tradition into the next generations. The festival reminds us that this region of our country, as one of the few, was steeped in multi-faith and multi-national atmosphere. I hope that twenty years of the festival tradition have made us aware of each other; opened our hearts and minds to the other one who is our neighbor. (…)

On Friday evening, January 30, 2015, with the blessing of Archbishop Abel – Primate of the Lublin-Chelm Orthodox Diocese, the jubilee of the 20th International Festival of East Slavic Carols began.

In the beginning, the rector of St. John the Theologian parish in Terespol Jaroslaw Los, Director of the Terespol Municipal Cultural Centre, Mrs. Anna Pietrusik and The Mayor of Terespol, Mr. Jacek Danieluk addressed to the audience “For twenty years, the festival has been hosting on Terespol. It is worth mentioning from this place the first originators: pr. Alexei Andrejuk and s.m. Krzysztof Krol. During these twenty years, we have been able to listen to many artists on the Terespol stage, from Germany or Romania. Hundreds of great bands, thousands of spectators. (…) The turn of the year is Christmas time. Today we Christians, the Orthodox and Catholic rite, rejoice at the birth of Jesus Christ, the only Savior of the World. Gathered here, they give an example of great love for one’s neighbor, mutual respect. We wish you that these three days of Terespol caroling will be for all of us a not forgotten spiritual and artistic experience”, said The Mayor of Terespol.

During the first day of the festival caroling at the Terespol Municipal Cultural Centre at Sienkiewicz str. 27 presented 6 choirs from Poland, Belarus and Ukraine. They performed: The Choir of the Orthodox Parish of the Covering Veil of Mary the Theotokos of Slawatycze, Folkl Band “Czeremszyna” from Czeremchy, Female Vocal Band “Vidymo” of the Union of Ukrainians in Poland from Sanok, Choir of the Lublin Orthodox Cathedral of the Transfiguration of the Lord of Lublin, the Folk Band “Gamanina” of the State University of Computer Science and Radioelectronics from Minsk, Belarus, and the Children’s and Youth Choir of the Orthodox Cathedral of the Transfiguration of the Lord from Vinnitsa in Ukraine. Each of the choirs received a statuette, an icon and a small gift in memory.

On the second day of the 20th Jubilee Festival of East Slavic Carols in Terespol on Saturday, January 31, five choirs were presented in front of a large audience. The first performers were Soloists, Choir and Symphony Orchestra of the Representative Artistic Ensemble of the Polish Army. The core of the repertoire is not only patriotic or soldier’s songs, but also carols and pastorals. Most of them date back to the 17th and 18th centuries. It is no coincidence, therefore, that artists are dressed in national costumes – the “kontusze”. After more than an hour of concert, numerous audiences watched a film about the history of the festival. Then his vocal abilities were shown by the Female Vocal Band “Vidymo” of the Union of Ukrainians in Poland. “Vidymo”‘s repertoire is songs and carols that have been sounding in the Carpathians for centuries. We search for old songs and develop them for ourselves, for our team, and we think that such gems are important for us and for the listeners,” said the band’s conductor mrs. Marianna Jara. In the interval between performances, the organizers once again thanked pr. Alex Andrejuk the originator of the Terespol festival. In the second part of the auditions were performed by guests from abroad: the Choir “Volhyński Bells” of the Church of All Volhynian Saints from Lutsk in Ukraine, folkl Band “Gamanina” of the State University of Informatics and Radioelectronics from Minsk, Belarus, as well as the Children’s and Youth Choir of the Orthodox Cathedral of the Transfiguration of the Lord from Vinnitsa in Ukraine.

During the third, and at the last day of Terespol caroling, there were eight choirs and ensembles: the Choir of Children, Youth and Parents of the Orthodox Parish. . .of St. Cyril and Methodius from Biała Podlaska, Combined choirs of the City of Garwolin and the Roman Catholic Parish of All Saints in Sobieniach Jeziory, Choir “Aksion” of the Orthodox Cathedral of St. . Nicholas of Bialystok, Female Vocal Band “Oksamit” of the Orthodox Parish .of St.Mary Magdalene of Lutsk, Ukraine, Choir of the Orthodox Clergy of the Grodno Diocese of Grodno, Belarus, Church choir of the Orthodox Cathedral of St. . Mary Magdalene from Warsaw, Children’s Choir of the Church of Resurrection of the Lord from Brest, Belarus, and at the end of festival the Bandurist Band “Karpaty” from Lviv, Ukraine. In the interval between performances, the organizers sincerely thanked a group of volunteers who helped to handle the event.
On the occasion of the 35th anniversary of creative work, the Board of the Lublin Region awarded the Artistic Director of the Festival mr Andrzej Boublej cultural award of the Lublin region. Finally, all gathered at the Municipal Cultural Center sang the Christmas carol “Heaven and Earth” together. In total, 530 performers performed at this year’s edition of the festival – 16 choirs and ensembles from Poland and abroad.

The project “Jubilee XX International Festival of East Slavic Carols” is funded by the Minister of Culture and National Heritage and the Lublin Voivodeship. 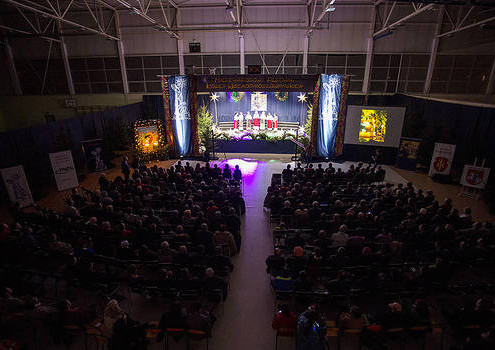 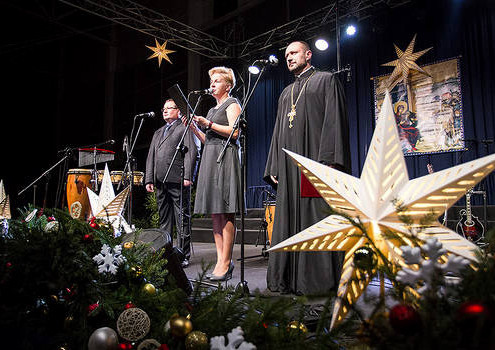 The film was made by Zbigniew Maciejuk, a reporter co-authoring the media portal pulsmiasta.tv, as well as a long-time collaborator of TVP Lublin. The author has been documenting the history of Terespol caroling for many years. Based on the rich archives, he prepared a film, crowning the 20-year history of the festival.

Photo exhibition at the 20th anniversary of the Terespol festival

The exhibition is the result of the work of many photographers documenting the festival since its first edition, which took place in 1996. The exhibition consists of several dozen photograms, presenting all editions of the International Festival of East Slavic Carols.

Honorary Patronage President of the Republic of Poland Bronisław Komorowski.